Elon Musk runs the Tesla brand like Steve Jobs ran Apple. Our Tesla case study will show how Elon Musk has used hype marketing straight out of the Apple playbook to create such an intense desire for their Electric Vehicles. Other major car brands appear confused and stuck in neutral.

Tesla’s production process failed miserably to keep up with all the pent-up demand. While that might spell doom for most brands, the scarcity of supply matched to the hype fuelled even more pent-up demand for Tesla. 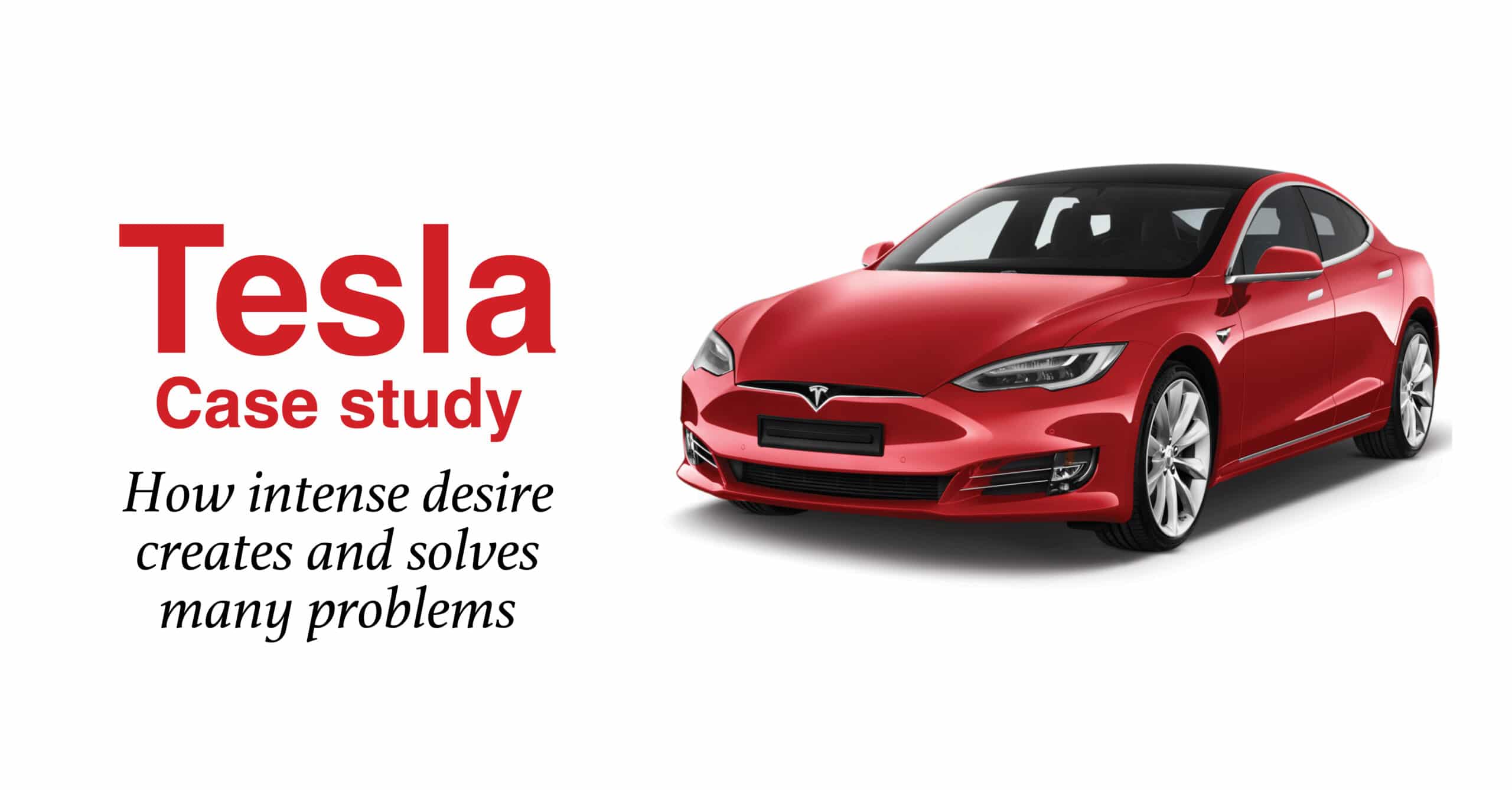 The marketing fundamentals that we show in this article are part of what we use in our marketing training programs. Marketers will learn strategic thinking, brand positioning, brand plans, writing creative briefs, advertising decision-making, marketing analytics, and marketing finance.

Over the past five years, consumers have discovered Tesla giving the impression of an “overnight success” that came out of no where. Yet, they have been in business since 2003. Moreover, it took Tesla the first eight years to sell a few thousand cars. By then, most of the founders were gone, leaving Elon Musk to steer the ship.

In year nine, they launched the high-end Model S car. And, they still only sold 100,000 over the next three years. Tesla is an excellent example of being in it for the long run.

The launch the Tesla 3 was filled with hype. They struggled to produce to keep up with demand. Everyone wanted one. But, Tesla couldn’t make them fast enough. From 2015-2019, the stock price went up and down like a roller coaster, doubling from $40 up to $85. And, in 2020, everything started to come together. The Tesla stock went up 10-fold, from $85 to over $900. Elon Musk is now of the richest people on earth.

Almost twenty years in the making, Tesla has become one of our most beloved brands.

Tesla started with a desire to shift the car market from gas-powered to electric (vision). While most other electric car companies failed, Tesla cars are remarkably different, as they score high for performance and style (focus). Tesla saw an opportunity to break the usual thinking that energy-efficient meant ugly, slow, and always needing a charge (identified opportunity).

Tesla has capitalized on the consumer’s readiness to do something for the environment and has created a movement. So, Tesla took a different approach. They started at the high end to create a strong desire for their beautiful cars. And then, they moved down to open up to the masses (market impact). Well, the elite mass! Their cars remain a high ticket item. Finally, following the release of the Model 3 in 2018, their quarterly sales jumped 4-fold over two years (performance result), and the stock price is up 10-fold.

What Tesla does best

Tesla has capitalized on the environmental trend. Tesla has done so well because of its 100% focus on electric vehicles, whereas every other car company has treated it as an option. I equate that like a vegan getting a salad at a steakhouse. Those vegans would much prefer going to a restaurant focused on their beliefs. Tesla understands that being an environmentalist is a lifestyle choice, not an option. The traditional car companies treat their electric vehicles as an afterthought. “We also have that in electric, for $20,000 more.”

Tesla has used the hype-style marketing style of Apple. Elon Musk has borrowed from the Steve Jobs playbook. He uses event-style marketing, an outspoken visionary voice, and he is continually challenging the status quo. Yes, he goes offside on Twitter all the time, but we might be glad that we never saw Steve Jobs tweet.

Another borrow from Steve Jobs is their simplified product.

A traditional car engine uses 2,000 parts. In contrast, the Tesla engine uses only 20 parts. Moreover, Tesla treats their cars like technology. As Apple has done with fewer parts, Tesla can gain better control of their costs.

Stylish designs. Like Apple, Tesla emphasizes style, which adds to the desire. Paying $55,000 or $110,000, Tesla understands that an expensive car must be beautiful. Teenagers want a Tesla car because they are cool, adding to the pent-up demand they have created.

Everything you need to run your brand. Our readers reach for Beloved Brands a few times each week as a reference toolkit to help them with the day-to-day management of their brand. Almost 90% of our Amazon reviews receive 5-star ratings,

Tesla’s brand idea is “the electric vehicle designed for our future, with shockingly high performance, and stylish designs.”

First, let’s use our functional and emotional cheat sheets to see where Tesla should play.

To help brand leaders kickstart their brand positioning work, I have taken the 9 functional need state zones that expands to over 50 potential functional benefits. As you look through the list, gravitate to the functional benefits you think will fit the needs of your consumers and differentiates your brand by looking for words where your brand does it better than competitors.

The functional benefits that Tesla should focus on includes works better for you, sensory appeal, and the experience.

Moreover, we have a list of 40 potential emotional benefits help build an emotional brand positioning statement that differentiates your brand. Below, the emotional benefits that Tesla should focus on includes feeling free, a sense of optimism, and getting noticed. 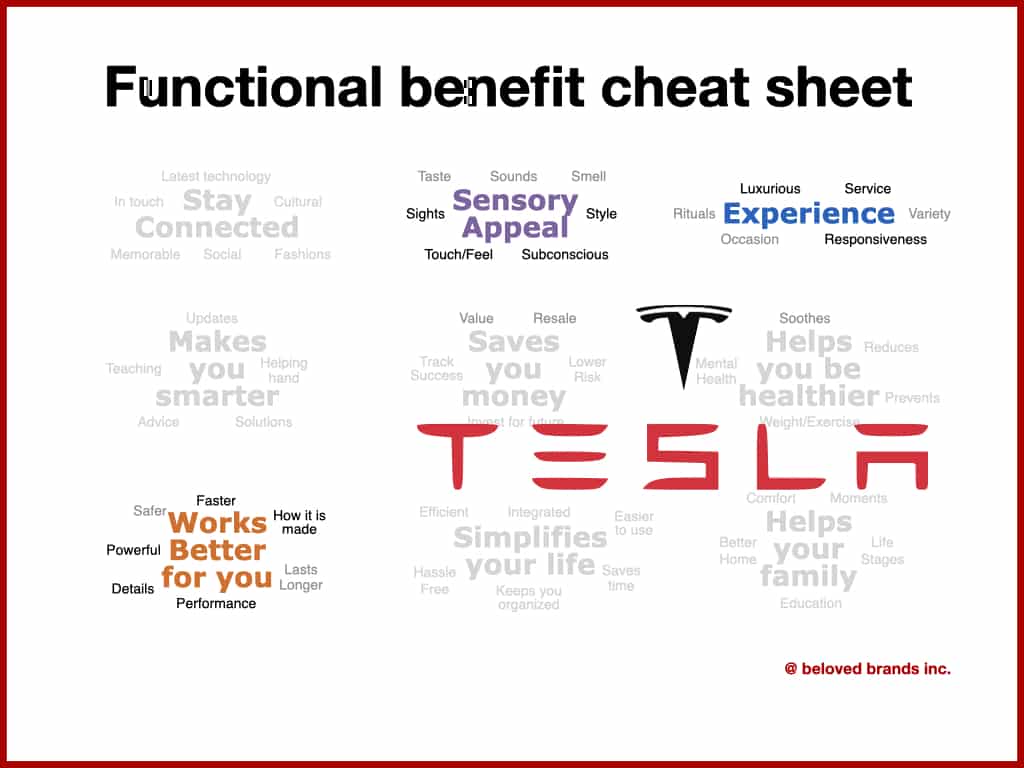 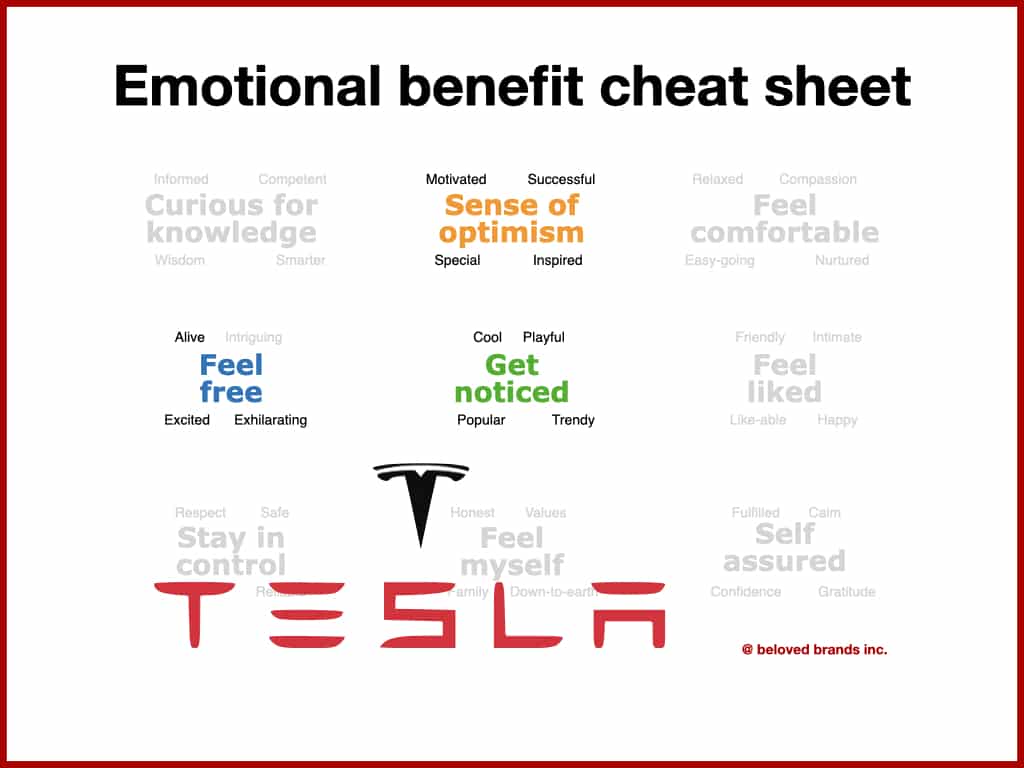 To illustrate, click on Tesla’s consumer benefit clusters above.

Our marketing programs What type of marketer are you?

We believe that marketers learn best when they see our marketing concepts applied to brands that look like their own. We have come up with specific examples – consumer, B2B and healthcare – to showcase our marketing tools. Click on the icon below to choose your interest area. 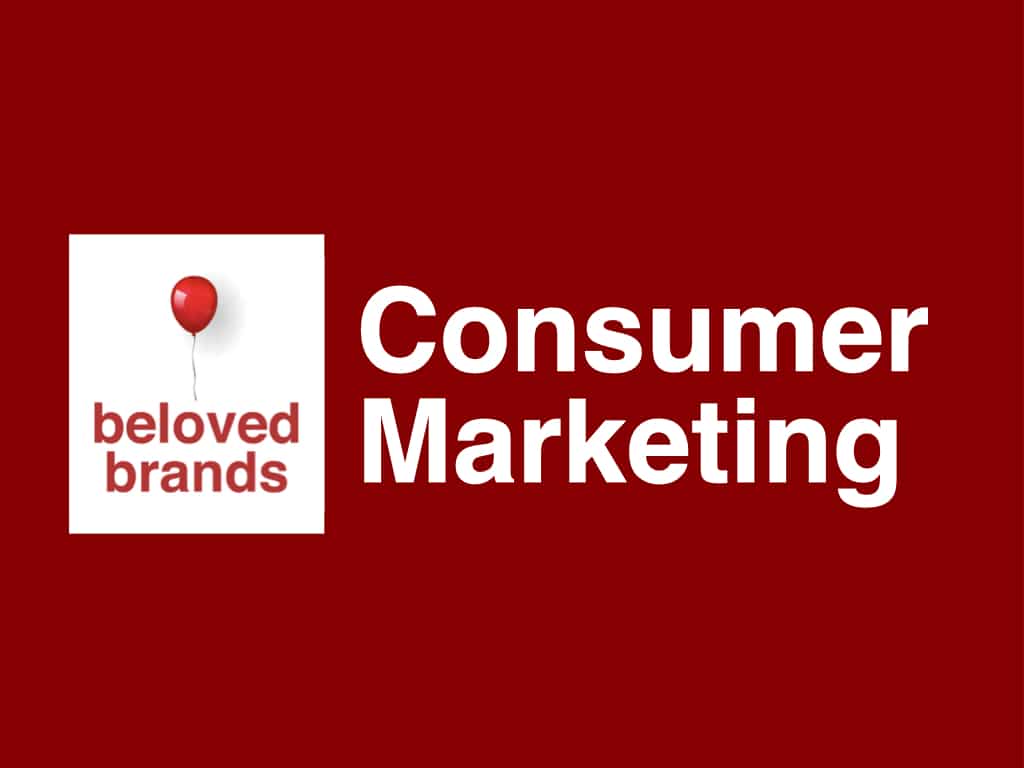 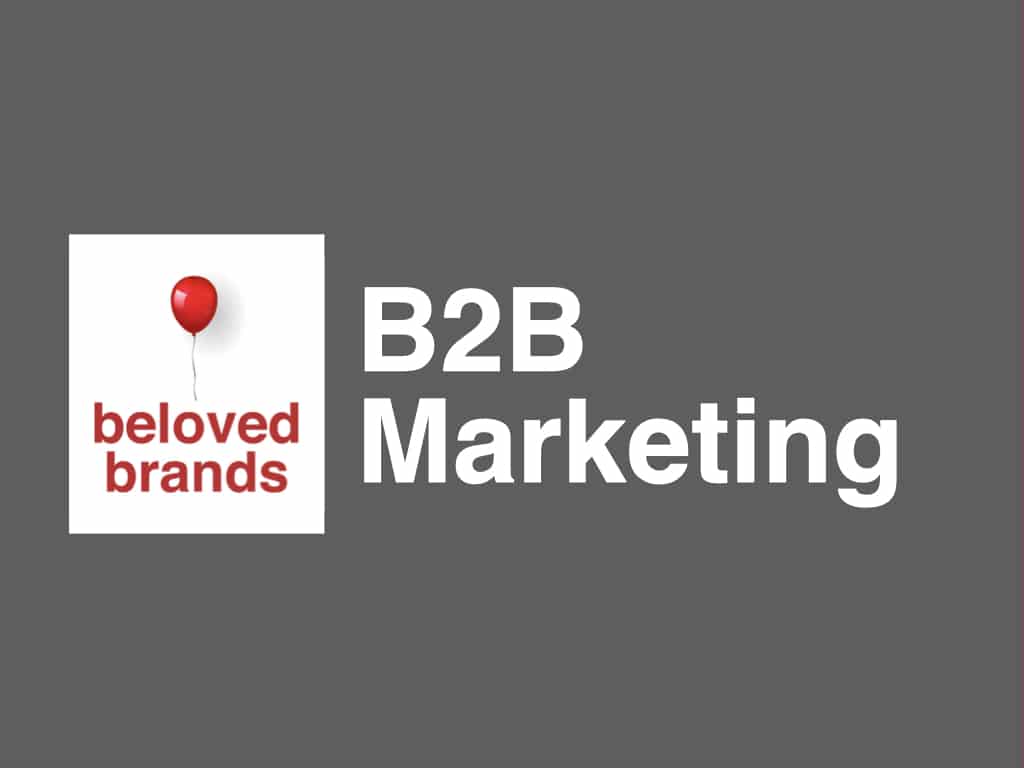 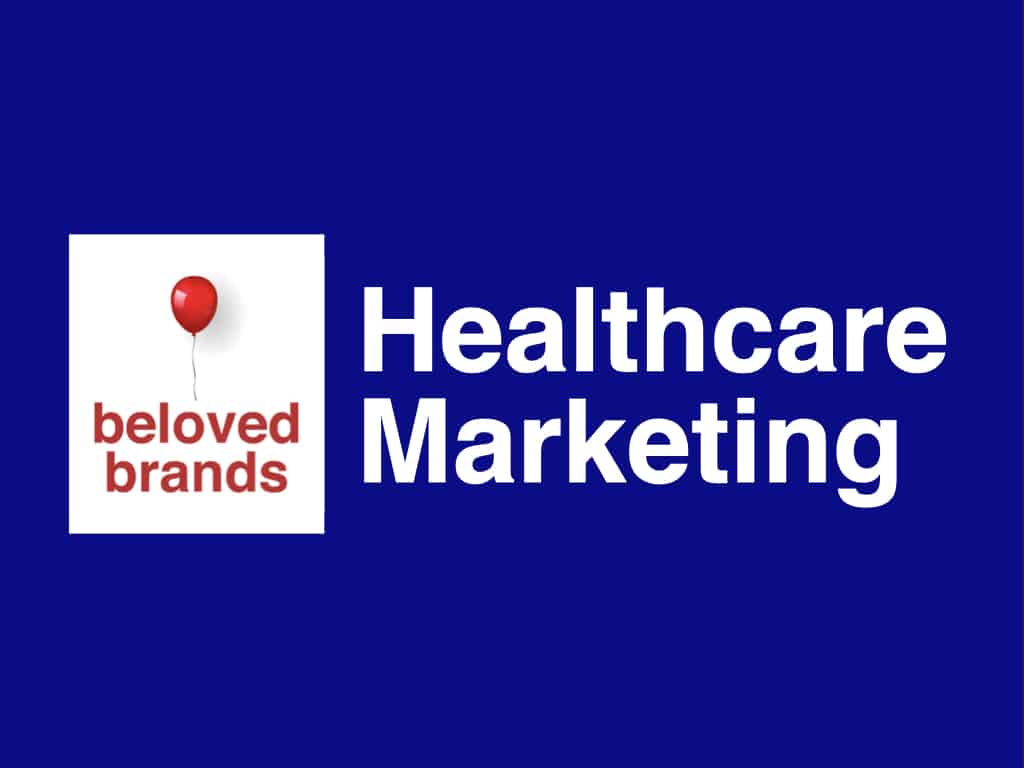 Once we have narrowed down to potential clusters of the functional and emotional benefits, we take 2-3 support words per zone to create a cluster. Below are key benefit words we will use to set up Tesla.

To make sure the brand idea steers everyone who works on the brand, use our brand idea map.

Five main touchpoints reach consumers, including the brand promise, brand story, innovation, purchase moment, and consumer experience. Regardless of the order, they reach the consumer; if the brand does not deliver a consistent message, the consumer will be confused and likely shut out that brand. While brands cannot control what order each touchpoint reaches the consumer, they can undoubtedly align each of those touchpoints under the brand idea.

To illustrate, click on Tesla’s brand idea map above.

How the consumer touchpoints deliver the Tesla brand idea 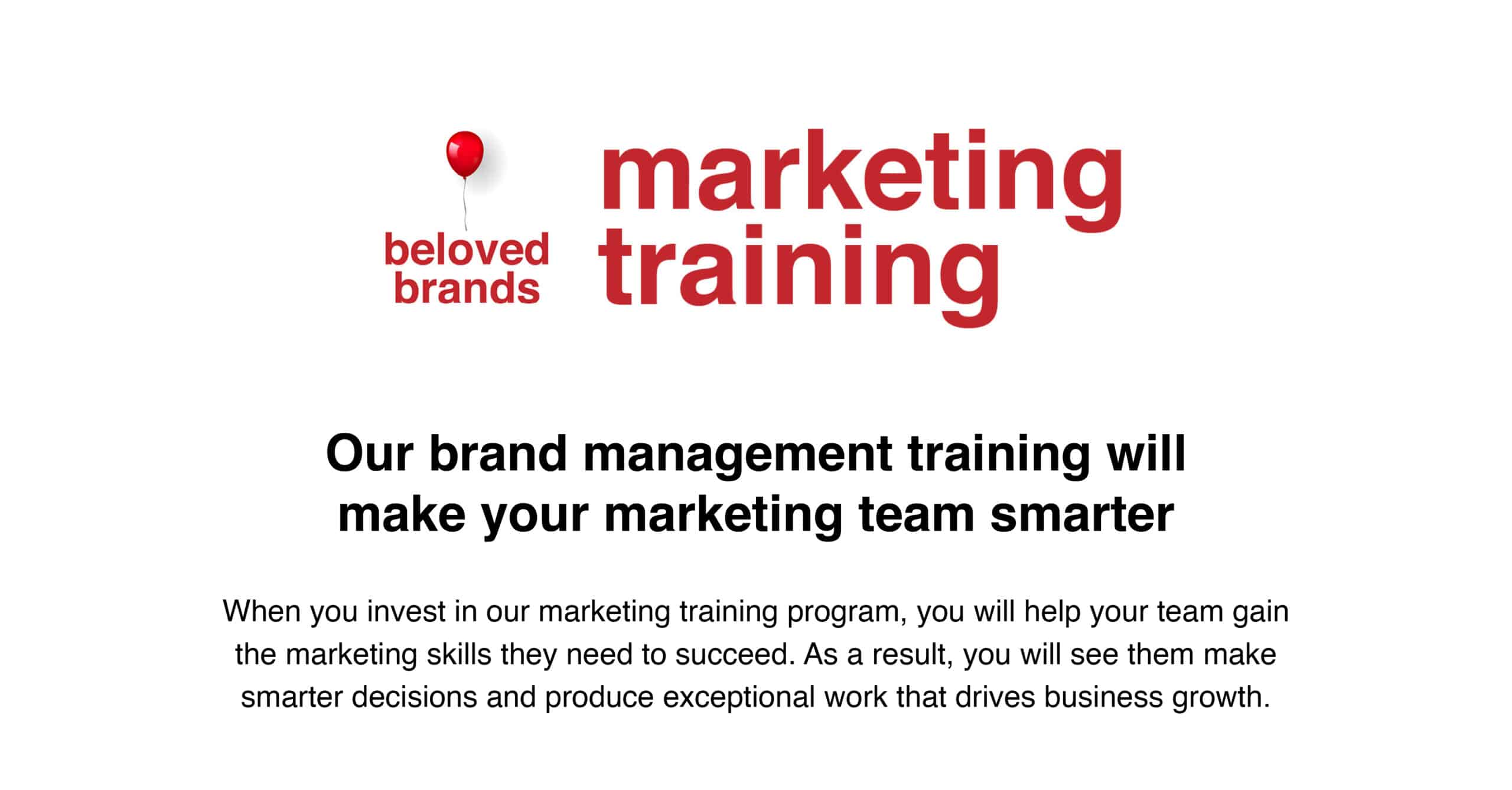 Learn how our marketing training can help your team

How Tesla’s brand plan lines up

Let’s build Tesla’s Brand Strategy Roadmap. Tesla vision statement is “to create the most compelling car company of the 21st century by driving the world’s transition to electric vehicles.” There are a few key issues in the way of that vision.

With an early dominant lead in electric vehicles, how can Tesla maintain their power player position, capturing consumers moving away from traditional gas-fueled cars?

1. How can Tesla maintain the power player position while competitors are investing in battery technology?

We see Toyota and Nissan investing in solid-state batteries that will force Tesla to keep investing in new technologies.

2. How can Tesla capture a bigger audience within this decade?

Despite Tesla’s lead, they remain a niche disruptor for the elite. The current Tesla consumer is 54 years old, 70% male, with an income of $154,000 USD.

Tesla will have to decide if they will continue to own the luxury market and let Toyota and Nissan own the mass market. At the current price points, Tesla will remain the electric vehicle for the elite. Also, if Tesla chooses a broader target option, Tesla may need to fill out its lineup with more practical car choices, especially in the SUV product.

3. Should Tesla do a better job in getting its message out?

Many believe Tesla should be advertising, even if in big moments (e.g., Super Bowl), to ensure they own the story that delivers their vision. Elon Musk has become a polarizing figure, with an inconsistent voice on Twitter. There is a belief Elon Musk’s voice maybe be pushing away female consumers, who only make up 30% of Tesla sales. Yet, the Lexus ownership is evenly split between male and female.

It seems Tesla is avoiding advertising, almost for principle, not whether or not it is smart. I’d suggest they look at how Google has done their ads, with big huge stories that connect emotionally with the consumer.

4. How to keep Tesla focused on winning the EV market?

As a leader, Elon Musk sends many conflicting signals that can scare investors. Internally, Elon Musk’s approval ratings have fallen from mid-90% to mid-60% over the past few years. Will Elon Musk’s side projects distract from the Tesla battles? Is self-driving a reality or a distraction?

Learn to use a Brand Strategy Roadmap

If you enjoy this case study, you will love some of our other case studies including:

Invest in your future. If you are an ambitious marketer, looking to solidify your marketing skills, our Brand Management Mini MBA will teach you about strategic thinking, brand positioning, brand plans, advertising decisions, and marketing analytics.

Have a look at our brochure on our Mini MBA program

Use  >  to move through the brochure or  x  to see the full screen.

You get 36 training videos and our Brand Toolkit ($200 value) that has over 120 PowerPoint slides you can use for presentations on brand plans, brand positioning, and business reviews. We provide key chapters from our Beloved Brands Playbook, and a Brand Management Workbook with exercises to try in real-time. Earn a certificate you can use on your resume or LinkedIn profile.

Learn more about our Mini MBA
Share this with your network

Our readers tell us they reach for Beloved Brands as a reference tool to help them with the day-to-day management of their brand. We are proud that almost 90% of online reviewers have given Beloved Brands a 5-star rating. As a result, it has been a #1 bestseller in brand management. 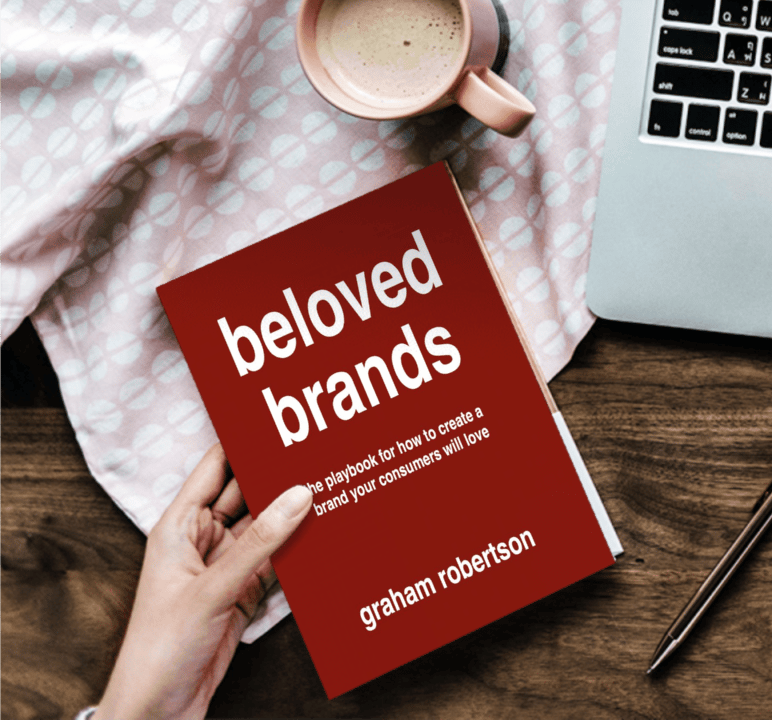 Our Mini MBA replicates our four full days of in-person training we use with marketing teams. You get access to 36 video lessons that cover strategic thinking, brand positioning, brand plans, advertising decisions, and brand analytics.
Learn more about our Mini MBA

Our marketing programs What type of marketer are you?

We believe that marketers learn best when they see marketing concepts applied to brands that look like their own. We have come up with specific case study examples for each type of marketing, whether you are focused on consumer, B2B, or healthcare brands. Click on the icon below to choose your marketing interest area.